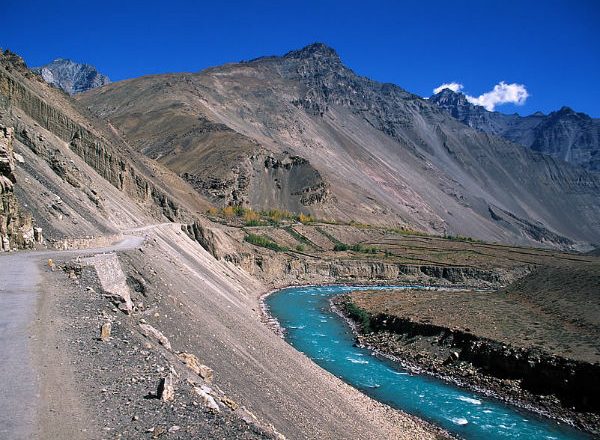 How do I get from Delhi to Spiti Valley?

The Spiti Valley is located in Himachal Pradesh in India. The name “Spiti” means “the middle land”, it is the land between Tibet (now China) and India.

Spiti valley is surrounded by Ladakh in the north, China to its east, Kullu valley to its south, and Kinnaur to its southeast side.

It is scattered with beautiful tiny villages and monasteries, and those who visit Spiti Valley are spellbound by its beauty.

The majority of inhabitants of Spiti valley are farmers who grow crops of barley, wheat, and peas during the summer. Spiti Vallet average height is around 12,500 feet

There are two routes to go from Delhi to Spiti Valley :

How do I get from Delhi to Spiti Valley via Manali?

Several ordinary and AC / Volvo buses are available between Delhi ISBT and Manali at regular intervals.

Manali to Kaza distance is about 202 km. There are only two ordinary buses that leave from Manali Bus Stand to Kaza at 5.00 a.m. and 5.30 a.m. Himachal Roadways run both these buses, and they take the route of Rohtang Pass, Batal, Kunzum Pass, Losar. They take about 11-12 hours to reach Kaza, depending upon the road conditions.

Some tourists who travel by private taxis detour at Kunzum Pass for a one day trip to Chandratal (The Moon Lake), which is a very scenic lake at an altitude of 14,100 ft.

Several shared jeep/taxi also ply on the Manali to Kaza route. You have to book your seat in advance at the taxi stand. They start early morning from 6 am onwards.

How do I get from Delhi to Spiti Valley via Shimla?

There is no direct bus connectivity to travel from Delhi to Spiti Valley via Shimla. You have to take a bus from Delhi to Shimla and another bus from Shimla to Kaza, which goes via Rekong Peo.

This is an all-weather route open almost throughout the year, but subject to weather and road conditions from Reckong Peo to Kaza.

It is advisable to take an overnight bus from Delhi to Shimla to save on the costs of the night stay. You will get several ordinary and Volvo AC buses from Delhi ISBT at regular intervals which reach Shimla in 9-10 hours

If you reach Shimla early morning, then you can get a connecting bus to Reckong Peo. There are several governments as well as private buses that run between Shimla and Reckong Peo every hour from 5 am onwards from the new bus stand.

The journey from Shimla to Rekong Peo takes around 8 hours to complete with halts for breakfast and lunch.

You need to spend a night at Reckong Peo. Homestays are readily available near the bus stop, and if you prefer hotels, then you will get them near the market, but they are comparatively expensive.

The homestays usually cost INR 400-600 for a room in Rekong Peo.

The bus from Reckong Peo to Kaza departs at 7am in the morning. There is only one ordinary bus running between Reckong Peo and Kaza. It takes around 11-12 hours to reach Kaza depending upon weather, and the road conditions. The bus arrives in Kaza in the evening.

Here are a few popular tourist attractions of this route from Reckong Peo to Kaza:

Return journey from Spiti valley to Delhi via Shimla:

There is an ordinary single Bus from Kaza to Reckong Peo, which departs from Kaza at 7.30 a.m. It reaches Reckong Peo at around 5 p.m. You can purchase a direct ticket up to Shimla and catch the connecting 7:00 p.m. bus from Reckong Peo to Shimla. From Shimla, several buses go to Delhi at regular intervals.

What is the Spiti Valley temperature?

Spiti receives heavy snowfall during the winter months of December, January, and February. During winter, most of the villages are cut off from the rest of the valley. The best time to visit Spiti is from June to September when the Spiti valley weather is sunny and pleasant. Spiti Valley is also the most accessible from both the routes during these months.

Which Route Should I Take for Spiti Valley from Delhi?

If you are traveling in Summer, then the best route is the

route. Most travelers prefer this route. But, if this route is closed (during winter), then you can go for the

The Delhi-Shimla-Kaza route is longer, but it has the advantage of being open thought the year. It also has gradual ascent, so there is better acclimatization and reduced risk of AMS i.e., altitude sickness. This route is closed if there is heavy snowfall in the Kinuuar region.

Best is to do a complete circuit — arriving at Spiti by one route and departing by another.

ATM at Spiti Valley: Do carry enough cash with you as there are only 2 ATM’s in Spiti. One ATM is in Tabo and the other is in Kaza, but most of the time, they don’t function because of network issues or no electricity.